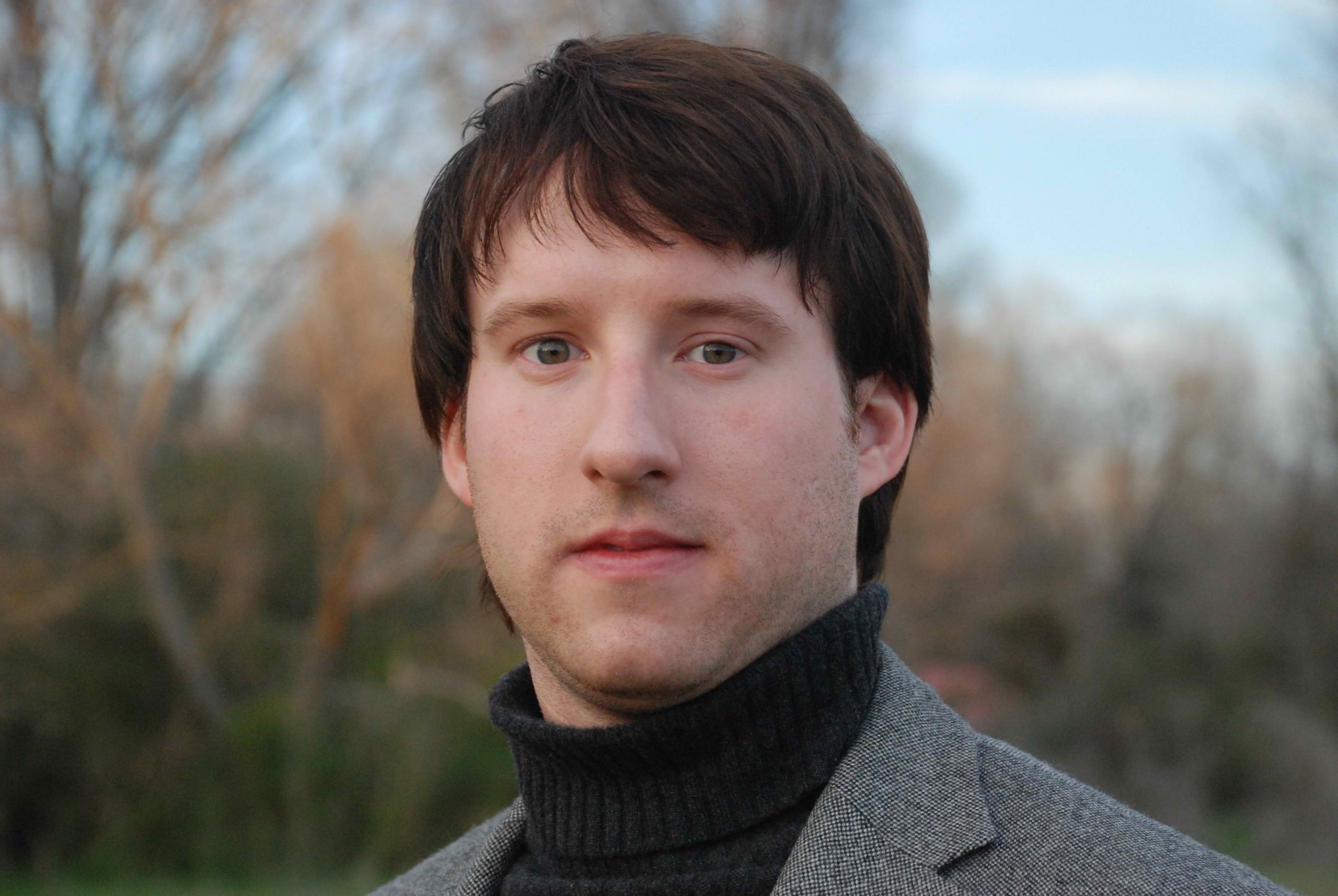 Douglas Ray, a 2010 Lambda Literary Foundation poetry fellow, teaches at Indian Springs School, a boarding and day school in Birmingham, Alabama. He received his B.A. and M.F.A. from the University of Mississippi.

The setting to this gay love story is the American South (particularly MIssissippi), where conservative attitudes dominate everything from politics to social pressures (“We’ve both got those good, Biblical names,/ our parents’ hope that we’d be pious and breed/ brilliant, godly grandkids for them.”). But young people manage to locate or create spaces to exercise rebellion against convention or to express their differing lifestyles. The drug culture, the underage drinking culture, but also the outsider groups like the Goths also provide outlets (even if unhealthy ones) for queer youth to survive. In this book of poems about a young gay man who commits suicide–although a personal loss for the speaker (the suicide’s ex-boyfriend) and the suicide’s friends and family–also a commentary on the landscape that forces queerness to “shrink back into the closet”? Is He Will Laugh yet another troubling testament about queer youth in America?

I’ve always been fascinated by the South as a queer space with a wide variety of queer of characters. Like so many things in the South, “otherness” is fine as long as it doesn’t become the subject of conversation; queer is fine as it is polite, mannered, and appropriately deferential.  Generations of “different,” “eccentric,” “emotional,” and “artistic” queers have worn seersucker and poplin suits in the hallowed ground of the Grove at Ole Miss on football game days, but they still function in a regional vernacular that is somehow acceptable.  A good performance of manners can allow someone who sexually “other” to “pass.”

One reason to locate this book in the South, in Mississippi, is because that’s what I know.  Another reason is because it’s an important thing to see that the “hospitality state” is not always welcoming or affirming of those it views as misfits or unclassifiable—queer.  My intention was not to make a grand statement about the “state of queer youth in the South.”  It was to tell a particular story of two young men who were located in a particular place with the two men and the place all having distinct characteristics.

He Will Laugh’s story is extreme; in some ways, I think that the South is a place of many extremes, often contradictory or indicative of great disparity.  The hatred that the South is so often associated with can be equaled by deep, abiding love and generosity.  One major feature of the environment of the South is an appreciation of storytelling.  We’re a region steeped in narrative, so I wanted to voice a queer one that does not so much preach that x, y, and z were “causes” of the tragedy, but one that asks us to examine how we embrace or disregard those who are different and in dire need of acceptance.

As someone who teaches high school students in the South, I want to believe this popular idea of “It Gets Better.”  I really, really want to.

There’s an interesting conversation (maybe even a tension) between the mentions of cult items such as “the new Vampire Weekend album” and visits to the sacred gay bar “Dick and Jane’s” with the references to classical mythology and classical music. These are distinct languages in distinct worlds that the speaker (who writes to his lover from Paris and South Africa) knows and weaves together. The new code shapes sonnets with titles like “Mississippi Queen” and “You Prefer John Waters to My Truffaut.” There’s a strong suggestion that Isaac, the tragic protagonist, was unable to navigate between these worlds as easily as the speaker. In fact, when they break up, it’s because Isaac shuttles off “to finish school.” After the news of Isaac’s death, the speaker’s vehicle for his emotions is a chaconne and watching “Glenn Gould play/ the Goldberg variations.” Does this queer narrative turn into a narrative about class and lack of access? Is the speaker’s saving grace his ability to reach for and attain more sophisticated resources, particularly because he’s older?

I think that any sort of specific knowledge is privileged and can seem inaccessible to someone who lacks that knowledge—be that of classical music or of 1990s one-hit wonders or of poetry, for that matter.  The youth of both characters (Isaac 18-20; the speaker 21-23) signifies the fact that both are learning to negotiate the world in whatever way is most comfortable.  The tension between their distinct languages or fountains of reference in some way contributes to the allure of one-to-the-other, mutually.  I conceived of each character’s knowledge and quirks as related to each character’s interests more than issues of class and access.

The speaker has lived slightly more life and may be a bit more worldly wise, but maybe not as much as he’d like to think.  I don’t know if the speaker’s experiences and vision are his saving grace as much as they are tools for coping with the awful mysteries that are left in the aftermath of the suicide.

The title gestures toward the Hebrew origins of the name Isaac. There is some laughter in the book–the awkward moments of courtship, the giddy getting-to-know-you stage–which turns into dark humor (“We all want to know/ what it’s like being dead. You say,/ It’s Greco-Roman, shady and shit.”), and, after the speaker recalls getting dumped by Isaac, rage (“Let’s work this out. Where’s the laughter/ your name promises?”). But it in the end, this is a book filled with grief, loss, and heartache. How did you come to terms with titling the book He Will Laugh? Did you consider others?

The title has always been He Will Laugh, from the outset of the project, which began as a final project for Ann Fisher-Wirth’s American Long Poem class at Ole Miss.  At the time, I had no idea of the tragic shape the sequence would take.  When the sequence’s course became clear some two years later, the tension between the promise and hope contained in a name and the terror of reality resonated with me. I went back to Genesis to read the story of Isaac—the miraculous birth to parents at or near 100 years old, the commandment to his father to sacrifice him (though, ultimately, a ram was sent instead), and his being tricked by his son for a birthright in his old age.  The stories are far from comical, but are crucial in shaping the Biblical landscape.

The balance of the book clearly leans toward grief, loss, and heartache, but as brutal as those feelings may be, there is a lingering tenderness and love amidst the darkness.  I hope that the depth of grief corresponds to the height of love and affection, which may not be expressly laid out, but is present in the gaps and gestures.

Part of the title remains a lasting prayer—that there will be laughter where there is grief; that the future tense of laughing won’t always be future, but will be present for the speaker in the world of the living and for Isaac in the world of forever.

He Will Laugh is such a focused project, are you discovering, as you move on to your next book, that it still haunts you? Or are you finding ways to cultivate entirely new (and different) subject matter?

He Will Laugh is a very focused project and, as such, the material is fairly self-contained, meaning I haven’t been revisiting the subject matter in more recent work.  I am trying not to write with a definite, precise project as of yet; working with a focused project is effective and productive for me, but I am curious to see if, taking away that scaffolding, I see new directions in my work.