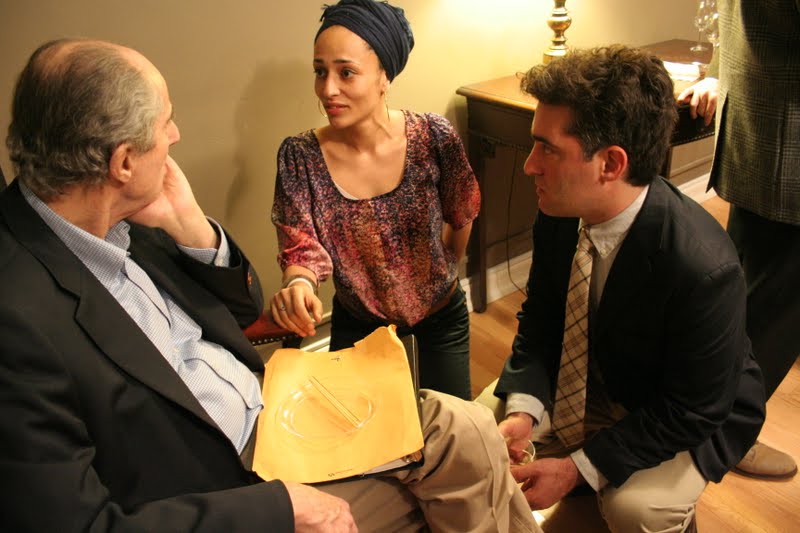 Critical Mass postings celebrating Philip Roth include a podcast of the National Book Critics Circle collaboration with the Center for Fiction in celebration of Philip Roth, a range of  reviews, a 50-minute video of Roth reading from his NBCC-award winning autobiography, Patrimony, his acceptance speech when he won the National Book Critics Circle fiction award for The Counterlife in 1988, and, today, Nathan Englander's reflections on rereading Portnoy's Complaint at forty. (Englander above right with Roth and NBCC fiction finalist Zadie Smith at the celebration.)

Throughout my childhood a pair of mahogany, Chippendale-style nightstands sat, one on each side, next to my parents’ bed. These nightstands had double doors with a metal lattice through which you could see, end to end, a row of books. One day, I opened the doors of the night table on my mother’s side of the bed and—for who knows what reason—pulled that row of books free.

Behind it, I discovered a second row of books. That second row was the perfect place for the mother of a teenaged yeshiva boy—a woman who also happens to be a voracious reader—to stick a copy of a novel like Portnoy’s Complaint.

By the mid 1980s, when I pulled it from the nightstand, the novel’s transgressive content might have caused markedly less shock to my system than it did when first published in 1969. But, thanks to my religious education, I’d been kept sheltered enough from secular America to allow for a dizzyingly provocative read. (As for provocations—and I first told this story with Roth listening—my mother’s habit of calling me to the table by screaming, “Portnoy, dinner’s ready!” became a lot less funny after I’d finished the book.)

That novel opened my eyes to Roth, and to a new and bracing kind of literature. It marked a turning point for me as a reader the way only very few books growing up did. But it’s another Roth book that played that role for me as a young writer. That book, published fifty years ago when Roth was just twenty-six, was called Goodbye, Columbus.

I may not be religious about religion anymore, but I’m deeply religious about books. And I’ll tell you, there are certain moments of discovery when you understand—not as metaphor, not as exaggeration—that the story you’re reading was written solely for you. Somewhere a writer has put something out into the world, and put it out there for you alone to find.

Sharpest in my memory from that collection is my reaction to the story “The Conversion of the Jews.” The story is set in a Hebrew School where young Ozzie cannot abide his teacher Rabbi Binder’s logic. Ozzie wants to know, if God can “create the heaven and earth in six days, and make all the animals and the fish and the light in six days—the light especially, that’s what always gets [him], that He could make the light…,” then why can’t Rabbi Binder wrap his head around the possibility of the virgin birth? As far as Ozzie’s concerned, it should be a relatively easy miracle for such a powerful God to perform.

I can hardly express to you what a revelation it was to find that story already waiting for me in the world. I remember looking at one of my own rabanim and having the exact same thought as Ozzie, experiencing the same rush of confused-surety and sincerity and pure intellectual rage. I remember my own deeply felt theological questions asked and then answered with, “Englander, get out!” That story, as with Malamud’s “The Magic Barrel,” and Singer’s “The Spinoza of Market Street,” made clear the connection that could be forged—real, concrete and unbreakable—between writer and reader, an intimacy as real as a friendship.

Revisiting the book at age forty, I found myself just as touched by these stories, by “Eli, the Fanatic,” and “Defender of the Faith.” The emotions were the same, but the concerns raised had grown and changed along with me. When reading “The Conversion of the Jews,” I used to worry about the main characters, about Ozzie and the Rabbi, and the blatant hypocrisy that so often infects faith. This time, the custodian, old Blotnik, seventy-one years old (and now younger than the book’s author) made his way from the background of the story to the fore. And a deeper, more painful caution shuffled out from the shadows at the old man’s side.

Blotnik’s mumbling had always seemed in Ozzie’s mind to be some sort of “monotonous, curious prayer.” And Ozzie worries that maybe the old man, with his constant devotions, has “memorized the prayers but forgotten about God.” It’s a beautiful and damning thought, and it filled me with worry about the state of our world.

But getting back to Ozzie’s greater point—that one strange miracle should allow for another—who knew, reading a book on the floor by my mother’s bed, that I’d ever turn out to be a writer myself and that I’d come to know, as I’ve had the good fortune to do, the author of the volume I then held in my hands? As for the other miracle, for that one I don’t need Roth, the man, at all. In rereading Goodbye, Columbus, I once again found that the author, through his stories, to me alone (to each of us alone) still speaks.

This essay was previously published in Yediot Ahronot and La Repubblica. Photo by Blaine Morris courtesy The Center for Fiction

Nathan Englander is the author of the short story collection "For the Relief of Unbearable Urges" and the novel "The Ministry of Special Cases." His fiction and essays have been published in The New Yorker, The New York Times, The Atlantic Monthly, The Washington Post, and anthologized in "The O.Henry Prize Collection" and numerous editions of "Best American Short Stories." Englander was selected as one of the New Yorker's "20 Writers for the 21st Century" and has received a Guggenheim Fellowship, a PEN/Malamud Award, and the Sue Kaufman Prize from the American Academy of Arts and Letters. His play based on his short story "The Twenty-seventh Man" will be produced at the Public Theater in February 2012.