In honor of the fifth anniversary of the founding of Critical Mass in April 2006, we're posting some of the most popular entries from our archives. This interview with Chimamanda Adichie was first published on September 12, 2006. She was working on her novel Half of a Yellow Sun, which went on to become an NBCC fiction finalist. Most recently Adichie appeared in an NBCC reading at the AWP in Washington, D.C., in February 2011. She read from new work, in a comic vein. 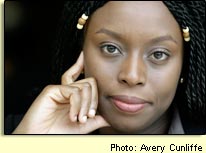 Chimamanda Ngozi Adichie's first novel, Purple Hibiscus, narrated by a 15-year-old whose strict Catholic father beats his wife and children in private, was widely praised, and shortlisted for the 2004 Orange prize, ranking Adichie, then 25, along with authors Margaret Atwood, Shirley Hazzard, Andrea Levy and Rose Tremain. Purple Hibiscus was longlisted for the Booker prize and won the Hurston/Wright Legacy Award.

Adichie, who divides her time between Nigeria and the U.S., spent last year as a Hodder fellow at Princeton and now is in graduate school in African history at Yale. In her just published second novel, Half of a Yellow Sun, she draws upon her ancestral past to write about a civil war in the 1960s that traumatized her family and her country.

Q. Tell me about the meaning of your name.

Q. Where were you born and raised?

A.I was born in Enuga, Nigeria. I grew up in the house previously occupied by Chinua Achebe. When I was seven we moved into what had been Achebe's house in Nsukka, where the University of Nigeria is. It's a lovely coincidence.

Q. After the publication of Purple Hibiscus, one critic called you “Chinua Achebe's twenty-first-century daughter.”

A. He is a remarkable man. The writer and the man. He's what I think writers should be. He is a human being.

A. My mother is vivacious. We tease her that she could become a politician. She walks into the market and people call out to her. She is the first female registrar at the University of Nigeria. My dad is very reserved, a mathematician. He went to UC Berkeley for his Ph.D. He is quick to point out that Berkeley had the best statistics department at the time. I love and like him, as well.

Q. Where did you attend university? Graduate school? What influenced your choices?

A. After a year and a half at the University of Nigeria, I decided I didn't want to study medicine. Because I did well in school, I was expected to become a doctor. But I wanted to be a writer. I realized I couldn't do that in my country, I would have to come to the U.S. My parents let me do it. They realized I was the kind of person who knew what I wanted. I came to the U.S. to study at Drexel University for two years. I had a scholarship.

Q. I understand you wrote Purple Hibiscus while a senior at Eastern Connecticut State University. What brought you to Connecticut?

A. My oldest sister Igeoma had a young son and she was starting a medical practice. I could pay for college by babysitting for him and live rent free. So I became his mother of sorts. I didn't have a life. I didn't hang out. I could come home and write at night. I would get him ready for school, go to school, then I'd be home when he got back, and cook supper. Then I would sit down and write. Before that I wrote a really bad novel. I was writing what I thought was hip. It wasn't true. Then I wrote Purple Hibiscus. It was organic. The first burst of writing went well. It was what gave me joy. Reworking was harder. It's what happens being from a nonliterary family. My sister is very practical. Her husband is a doctor, too. They didn't understand my need for solitude. When they would go off for the weekend, I looked forward to being at home alone.

Q. Tell me what it was like to work on a novel about the Nigerian civil war in the 1960s, when Biafra wanted to secede.

A. The Biafran was a very painful war, and writing this book has been painful. I don't think I ever will do anything like this again. It's as though I am picking through shreds of pain. I would often start to cry. What Biafra is, for the Igbo, it's people who are wounded, and somebody poured salt in the wound. On the other hand, I'm pleased about the prospect that this novel might get Nigerians talking about Biafra. A lot of the issues are not resolved. And I'm prepared to have people say that this young writer has no business writing about Biafra.

Q. You were born after the war. What sort of research did you do to capture the feeling of the buildup of tension, the massacres of Igbo, the arming of an independent Biafran army, the war scenes, the refugee camps, the starvation?

A. Working on the book, I surrounded myself with more research than I could use, including photos of children. It's unbelievable what starvation can do. I would think, they could be my cousins. My father has helped with research, answering questions I had. I'm using my father's memories.

Q. How was your father affected by the war?

A. My grandfather died in a refugee camp, during the war. But my father couldn't really say good-bye. The roads were too dangerous. My father is a very reserved man. He told me how finally he was able to get there, and somebody pointed at where his father had been buried. It was unmarked. He took a handful of dust, and brought it home. It broke my heart. He admired his father.

Q. How did you decide upon the narrative points of view for this book?

A. I have three major characters, two are men (one an English man) and the third is a woman. Biafra can't be told without the men. The men were in control. I have a rape scene that is very powerful, and very detailed. This is what happened to many women. It's a story I have heard over and over. It's a means of control to gang rape this girl in the midst of war. I think it's important to tell the stories of what women went through. I also like writing from the point of view of a white man. I am exercising my imagination, with a 75-year-old Englishman as my model.

Q. It seems you and your father are close.

A. When I was much younger I thought my father never slept. I thought he was invincible. Now he is older, he's diabetic and 74, and the average age for men in my country is 56. Every time the phone rings I'm afraid it's something. I'm fascinated by death and constantly thinking about death. For me, love and death come together.

Q. Do you think this connection of love with death has anything to do with the war?

A. What I know about the war was from listening to my father. I know the pain he went through. He would never say, “I was in deep pain.” He will say he took a handful of dust from his father's grave. In the end, Half of a Yellow Sun is a novel about love.