In honor of the fifth anniversary of the founding of Critical Mass in April 2006, we'll be posting some of the most popular entries from our archives. John Updike's Reviewing 101 was first published June 8, 2006, and is now being used in colleges and university classes.

Thirty-one years ago, in the introduction to “Picked Up Pieces,” his second collection of assorted prose, John Updike laid down his own six rules for reviewing. They are still the single best guide to fairness today: 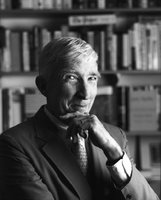 “My rules,” he writes, “shaped intaglio-fashion by youthful traumas at the receiving end of critical opinion, were and are:

1. Try to understand what the author wished to do, and do not blame him for not achieving what he did not attempt.

2. Give him enough direct quotation–at least one extended passage–of the book's prose so the review's reader can form his own impression, can get his own taste.

3. Confirm your description of the book with quotation from the book, if only phrase-long, rather than proceeding by fuzzy precis.

4. Go easy on plot summary, and do not give away the ending. (How astounded and indignant was I, when innocent, to find reviewers blabbing, and with the sublime inaccuracy of drunken lords reporting on a peasants' revolt, all the turns of my suspenseful and surpriseful narrative! Most ironically, the only readers who approach a book as the author intends, unpolluted by pre-knowledge of the plot, are the detested reviewers themselves. And then, years later, the blessed fool who picks the volume at random from a library shelf.)

5. If the book is judged deficient, cite a successful example along the same lines, from the author's ouevre or elsewhere. Try to understand the failure. Sure it's his and not yours?

To these concrete five might be added a vaguer sixth, having to do with maintaining a chemical purity in the reaction between product and appraiser. Do not accept for review a book you are predisposed to dislike, or committed by friendship to like. Do not imagine yourself a caretaker of any tradition, an enforcer of any party standards, a warrior in an idealogical battle, a corrections officer of any kind. Never, never (John Aldridge, Norman Podhoretz) try to put the author “in his place,” making him a pawn in a contest with other reviewers. Review the book, not the reputation. Submit to whatever spell, weak or strong, is being cast. Better to praise and share than blame and ban. The communion between reviewer and his public is based upon the presumption of certain possible joys in reading, and all our discriminations should curve toward that end.”