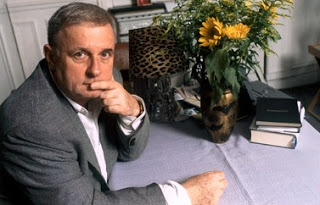 Each week, the NBCC will post a list of five books a critic believes reviewers should have in their libraries. We recently heard from novelist, biographer and critic Edmund White, who elected to break outside the critical realm for his list of five. Here are the books he named:
I suppose the main book that changed my life was Vladimir Nabokov’s Lolita, which I was reading on the Oak Street Beach in Chicago during the summer of 1960, just a few years after it was published. I was only twenty but I instantly loved this book because it was outrageously funny, sexy and passionate and, finally, gorgeously written. This triple threat of humor, sexiness and linguistic brilliance set a standard for me that I’ve wanted to emulate ever since as a writer (with small success) and that I’ve cherished in other writers.
Christopher Isherwood’s A Single Man, which I read in New York soon after it came out in 1964, was a completely revolutionary gay book, unprecedented and for my generation inspiring. For the first time someone wrote unapologetically about a gay man, his appetites and fantasies, the serio-comedy of his place in society. George, the hero, is an English ex-pat living in Los Angeles whose lover has left him. We see one day in the life of George, a man who lives mostly on auto-pilot but who is fully awake to certain key moments. Isherwood doesn’t explain how George got to be gay nor does he place him in a gay ghetto or outfit him with bitchy gay dialogue. Geroge is a fairly normal bloke whose problems are the ones everyone shares. Reading A Single Man opened the way for me to write serious and unapologetic gay fiction.

Marcel Proust’s In Search of Lost Time was a book I first read in high school (I wrote my senior paper on it) and again when I had hepatitis in 1969 and was home from work for two months and then again in the 1990s when I wrote a short biography of Proust. But I’ve dipped into it all my life. I’ve tried to resist his over-the-top style and to emulate his confidence that anything, studied long and hard enough, will become interesting. Most people don’t get beyond the first volume so they don’t discover how shocking Proust is—with the first scenes of gay cruising, the first instance of gerontophilia, gay bordellos and gay sado-masochism.

Colette’s Chéri, which I first read in New York in the 1960s (in my twenties), inspired me with its complex, unpredictable look at sensuality and love. Colette has the largest vocabulary in French fiction, a unique gift for capturing the world of the senses in words (everything from the smell of flowers to the sound of rain). She also has a way of using herself, a narrator called “Colette,” which has inspired me in my autobiographical fiction.

Roberto Bolaño’s The Savage Detectives, which I read just this last spring, is a book that renews my faith in fiction. Written by a Chilean author who lived in Mexico and Spain, it is bursting with narrative energy and that most elusive and seldom-mentioned of essential qualities: charm.
Edmund White won the National Book Critics Circle award for biography in 1993 for “Genet: A Life.” He is the author of twenty-two other books, including two books of criticism, “Arts & Letters” and “The Burning Library,” two books about Paris, a memoir, several collections of short fiction, and nine novels, including, most recently, “Hotel de Dream.”