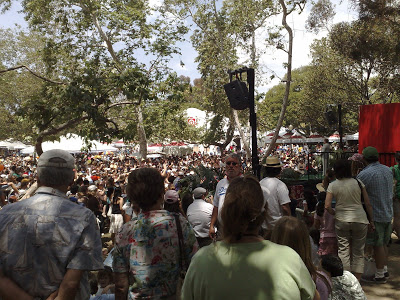 Given the sheer size of the Los Angeles Times Festival of Books, which this year drew about 400 authors and 140,000 visitors, I’ll have to limit myself to a highlights reel. So let’s begin at the beginning: the Friday night awards ceremony, which one longtime guest referred to as “sort of like the Oscars for nerds.” It’s true, there’s an extra quotient of glamor to the proceedings at Royce Hall, and I don’t see the NBCC juicing up each announcement with a brief burst of triumphal, Rocky-like music on the PA. By now the actual winners have been widely reported, so I won’t trot through all nine categories. A few observations, though. Stanley Plumly, who won the poetry award for Old Heart, also delivered the best anecdote of early privation: during his poetic salad days in small-town Ohio, his miniscule checks from magazines were routinely diverted to the Stanley Plumbing Company. Simon Sebag Montefiore accepted his award for Young Stalin via an effusive video, in which he slapped academics on the wrist for their terrible prose and admitted using his mother as a litmus test for readability. The fiction winner, Andrew O’Hagan, noted a common error (at least in Scotland): mistaking Los Angeles for “a suburb of Glasgow.” And let us not overlook Maxine Hong Kingston, who won the Robert Kirsch Award for Lifetime Achievement. At age 67, with a mane of white hair, she declared herself too young for such an honor, and went on to cite a favorite line from Thoreau: “I love a broad margin to my life.” She seemed to admire the sentence both in its figurative sense—its suggestion that supposedly marginal matters may be more central than we care to admit—and in its literal one, since she’s now writing a book-length poem with plenty of white space on every page. 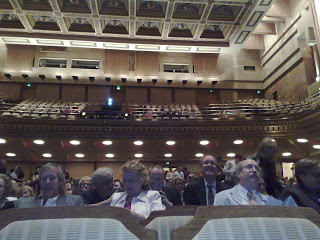 In any case, the lights went up, and the massive crowd of nerds poured up the aisles, out into the lobby, and then through a narrow archway: a kind of physics experiment. Beyond that archway lay the reception area, with its rippling waterfall of chocolate fondue, its heaped-up pasta salads and sushi and SRO mob scene under the balmy Western skies. While I frantically forked up some farfalle in an open space by the door, I had a nice chat with Michael J. Neufeld, whose Von Braun: Dreamer of Space, Engineer of War was nominated for the biography award. But like many of the Easterners on hand, I had begun to fade. I climb aboard the shuttle back to the tall, round, traffic-beleaguered hotel—a former Holiday Inn hiding its shameful past behind a chic remodel. Yes, there are second acts in American life.

The first panel I attended on Saturday was, well, my own. Breaking the Mold was supposed to be a discussion of literature and the Internet, and since it included notorious Web hater Lee Siegel as well as technology fiends like myself and Shelley Jackson, some audience members girded themselves for a slapdown. In fact the conversation, moderated by David Kipen, remained civil throughout. Siegel did get in his digs at the coercive nature of the Web—surely no more coercive, I suggested, than the radio was in 1930—and its encouragement of duck-and-cover anonymity (yes, a tender topic). But he warmed to Jackson’s remarks on hypertext and Tristram Shandy, to the point that Kipen wondered aloud whether this Peck’s Bad Boy of cultural criticism had “mellowed.” Well, let’s not go overboard. After the panel, we were escorted outside to sign books. Not too many people had procured copies of Amazonia. However, a shy progression of 13-year-old girls approached my table and asked to have their pictures taken with me.  Here, I thought, was a whole new demographic: these young ladies could go directly from some Hannah Montana Singing Doll to my own ironic ruminations on the Internet boom. As it turned out, they were all from the same school in Fontana, and were obliged to prove their attendance at the festival. Hence the photos with me—I was the equivalent of a rubber stamp on the back of their hands. The girls left. I hung around in the signing shed for a few more minutes, avoiding the sun and talking with Jackson (apparently she still wanted to be a rock star until sometime last week). Then, after a short stop at the authorial Green Room, we made our way through the tremendous, heartening crowds to hear Jane Smiley interview Gore Vidal.

I reviewed the most recent installment of Vidal’s memoirs, Point to Point Navigation, and had noted a decline in what I can only call quality control. So I was a little nervous about attending this conversation: I didn’t want to see one of my heroes stumble in public. I needn’t have worried. Vidal, in a wheelchair, was at the top of his game, whether he was taking Exxon to task for its mendacious, nature-loving commercials (“I sit there and pound the floor with my stick”) or putting George W. Bush through the wringer. His comic timing is better than ever—he works those pregnant pauses like a patrician Jack Benny. And as always, there’s a sense that the dramatis personae of American history are Vidal’s intimates, his playmates, his significant others. “I’ve been lying for a years about having read all of Aristotle,” he mused. “Now I see what I’ve been missing.” For most writers, this would be an incidental mea culpa. But for Vidal, it’s merely a means of contact with the most pragmatic of our founding fathers, as if they belonged to the same book club: “Now, Benjamin Franklin was also reading Aristotle at one point….” Egged on by Smiley, Vidal gave Thomas Jefferson high marks for his prose: “He was the poet of democracy—until Whitman, who wrote a bit better.” He had less use for Ayn Rand: “Preaching greed? You don’t do that to Americans. It was in our first Christmas stocking.” Perhaps some of these zingers have been recycled from previous interviews, and as another friend (and Vidal zealot) later pointed out, he has “an entire herd of hobby horses tethered nearby.” Still, I felt very fortunate to be in the same room with this phenomenal man, who saved some of his best lines for the Q-and-A. Did he have any final thoughts on the late William Buckley? Long pause. And then: “I hope it’s not too hot.”

Later on I dropped by Publishing: Where Do We Go From Here? Beneath a giant poster of the Periodic Table, four publishers—George Gibson, Johnny Temple, Susan Weinberg, and James Atlas—discussed the health of the business, which seems in need of some serious iron supplements. What’s the bad news? “Publishers have not yet figured out how to use the Internet as a marketing tool, and as a way to build audiences,” lamented Gibson. He also suggested that American readers had been “fighting a low-level depression” about reading itself since 9/11, and that our best hope for a literary SSRI would be the election of Barack Obama. For Temple, the problem was overabundance: “There’s a glut of books being published, and that’s clogging up things for everybody.” But he also saw a silver lining in new technologies, which have lowered the barriers of entry for aspiring publishers, and urged his colleagues to make peace with the digital Visigoths. “We should not be afraid of the digitization of books,” he said.

Weinberg, who spoke next, was absolutely on Temple’s wavelength. She cited the “instant production” of a recent title by George Soros, The New Paradigm for Financial Markets: The Credit Crash of 2008 and What It Means. The completed manuscript had shown up at PublicAffairs on March 24 of this year. By April 1, it was available in a host of e-book formats, and the print version goes on sale on May 12. Yet even as Weinberg embraced this Speedy Gonzales methodology, she minimized the gap between the old technologies and the new. Digital solutions, she argued, are ultimately “variations on those eternal verities that authors and publishers will always live by, no matter what the medium.” In this context, her comments qualified as good cheer indeed. Still, James Atlas brought the dialogue back down to earth by reiterating the profoundly irrational underpinnings of the entire industry. Gibson had earlier struck a similar note, asserting that bankers and fiscal types (but presumably not mortgage brokers) “think that publishing is insane.” Atlas upped the ante: “The idea that this is a business is just laughable,” he said. Whenever he talks pecuniary nuts and bolts with his board members, many of whom work on Wall Street, continued Atlas, they “look at me funny.”

Next door, at The Critic’s Voice, there was a similar whiff of Götterdämmerung in the air. Alex Ross, Richard Schickel, Albert Mobilio, and Nicholas Basbanes were hardly without hope for the critical enterprise. Yet Schickel, a wooly mammoth of popular criticism who has labored at Life, Time, and various other publications since 1965 (and who has also published more than 20 books), fired some curmudgeonly shafts at the defenseless blogosphere. Bloggers were ignorant and glib—and worst of all, they trafficked in opinion. At this point Mobilio did speak up on behalf of opinion. Wasn’t it, well, useful? A similar tug of war took place when the conversation turned to the digital delivery of text. Basbanes, who is currently writing a history of paper, argued that books would be around for a long, long time. (Is this guy in bed with the pulp-and-paper lobby? I don’t think so.) Mobilio countered that we were in the midst of a technological watershed, and that turning back the clock was no longer an option. 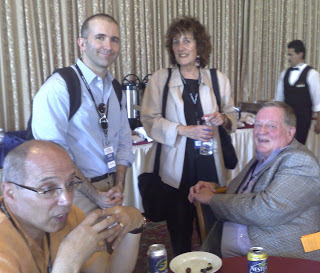 Ross remained on the sidelines to some extent, although he did cite Randall Jarrell’s famous, deflationary line about the good old days: “The people who live in a golden age usually go around complaining how yellow everything looks.” But if we’re wondering whether there are still zealous readers of criticism, that was put to rest during the Q-and-A, when one audience member griped at Ross for omitting Harry Partch from The Rest Is Noise: Listening to the Twentieth Century. “He’s in there,” the author doggedly insisted. For me that was a thrilling moment: a fan of just intonation wanting his just deserts (even if he happened to be wrong). Later, in the Green Room, I caught three of the panelists in a more casual mood. Here they are, folks, from left to right: Mobilio, Ross, Schickel. A formidable lineup, and surely proof that criticism is not dead—it’s only playing possum.