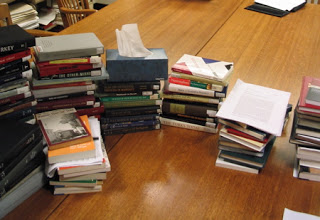 No rest for the weary critic. As I move swiftly into the 2008 publications, it’s both an exciting and a daunting task to confront the growing stacks of books in my studio. The following is an extremely abbreviated list of stand-out titles that I’m reading/ evaluating/ paging through at the moment:

I reviewed Sáenz’s last two novels, In Perfect Light and Sammy and Juliana in Hollywood, and his last poetry collection, Dreaming the End War, so needless to say I’m a huge follower of this Chicano writer’s works. The last two titles stemmed from a pacifist’s sensibility—political and profound without being preachy. This new novel, set during the Vietnam War, is a multiple-character point of view narrative that tells the sobering tale of the Espejo family. Though they live in El Paso, Texas, the Espejos, who watch the war plunder the young men from their community, must contend with the aftershocks of a conflict on the other side of the world.

Yolanda Sahagún, the young protagonist of Santana’s award-winning debut novel, Motorcycle Ride on the Sea of Tranquility, is now off to college. But she quickly learns that her education must extend beyond the dusty library stacks and the occasional trip to the museum. As she’s exposed to different ways of thought, and as her frame of reference expands, she must re-imagine her place within the intensifying identity politics of 1970s American culture and society. This novel is of particular significance since it’s one of the few to map out a college student’s awakening consciousness in Southern California’s Movimiento era.

Hill’s debut collection of poems is an ambitious project: an invented history of six generations of the Wright family from the town of Milledgeville, Georgia. An African-American bloodline, the Wrights bear witness to race and class relations in the changing and staunchly unchanging Southern landscape. The heart of this family tree is Silas Wright, who has come to realize that the biggest threat to his birthright is forgetting. So he fights it by keeping memory sacred: “The house I was born in still stands.”

Lemon garnered plenty of buzz after the release of his first book, Mosquito. This second collection, clocking in at 144 pages, is a hefty follow-up, but with his trademark energy and knack for his stark and startling imagery (“Be stunned/ the dark hymns/ In this dollhouse”). As the title suggests, the tone navigates between the songs of spiritual passion and the keening of solemn reflection as the speaker comes to grips with mortality, heartbreak, and the everyday shadows of life. “Abracadaver,” indeed.

When the Ground Turns in Its Sleep, Sylvia Sellers-García.

The Art of Political Murder, Francisco Goldman’s nonfiction account of the inquiry into the assassination of Bishop Gerardi in Guatemala City, gave readers a valuable history lesson about this conflict-ridden Central American country. Sellers-García offers a more intimate, fictional narrative in her debut novel about a young man’s journey to his family’s homeland in order to situate his personal history within the country’s troubled one. But his role as a seeker of the truth moves beyond his immediate goal: he’s mistaken for a priest and is asked to provide solace and orientation to the broken citizens of the community that he was expecting would do the same for him.

Labels: What Are You Reading?