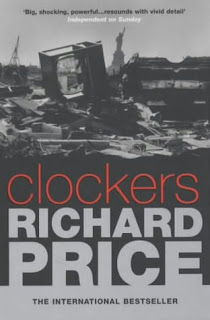 This week, the In Retrospect series is looking back at Richard Price’s 1992 fiction finalist, Clockers. Larry Mullane, a model for the character of Rocco Klein in Clockers, is a former homicide detective in Hudson County, New Jersey. He first met Richard Price in 1986 when he was working on the script for the film Sea of Love. Today he is an investigator for the New Jersey Lottery. Mark Athitakis sent along this excerpt from a phone interview with Mullane.

I’ll tell you something. I’ve known guys who’ve been cops for years who didn’t fit into the homicide squad as Richard did. Here’s a guy, standing there with a notebook, asking no questions, doing no police work. But there was not one scene that we ever went to, or one suspect or witness, anyone, a victim, that we ever interviewed or dealt with, who all of a sudden looked around and said, “Who the fuck is he?” Even the other cops. When we’d go to another jurisdiction, another city, whatever. None of the other bosses ever said, “What’s with that guy? Who’s he? I don’t know him.”

He sort of stuck out in the beginning because he didn’t dress like we did. He’d come in in a polo shirt and jeans and we’re all in jackets and ties. Then he started coming in wearing a jacket and a blue oxford shirt, and he didn’t wear sneakers—he would wear boat shoes. He could’ve been a plainclothes guy, or a detective or just got called in on overtime. We had guys who dressed like that all the time. Also, he would notice such intricate things, and the crazy speech patterns of some of these people, and the jargon that they used. He’d show me his notes for the next day, and I’d be scratching my head. “How did you write this down? Shorthand or something? How did you remember this?” He just does.

Sometimes he’d come in for a solid week, and then we wouldn’t see him for three months, he’d come in for one day or four hours, or I’d go over to New York to meet him because he had a question. Some days he’d come in for one day. It all depended on what his schedule was. We’d find out that he was working on Rain Man or The Great Train Robbery or some other movie as a script doctor. When he was writing the book he came in a lot more. But he wouldn’t necessarily be with the homicide squad. He’d be with drug dealers, a poor family in the city, with a kid.

In ’86, there were probably about 90 [homicides] in the entire county. Forty-five to fifty of them being in Jersey City, where we spent most of our time, and where our office was. Most of the homicides were drug-related. They’d be armed robberies so somebody could get money for drugs, and shootings over drugs. We dealt a lot with the narcotics squads, but we didn’t actually get involved in how you buy a ki, how do you cut up a ki, what’s it worth on the street. That was all extraneous bullshit, so we stayed away from it. Our thing was, get the narcotics squad to get us a couple of angles on this, let’s go out and interview some of the local mutts, and see what we could come up with. And we had an unbelievably great success rate. We had solved something like 92 percent of the homicides that were committed in ’84. By the end of ’85 we had solved something like 98 of them. So when Richard came in in 1986, we were on a high. We thought our shit was ice cream and we could walk around like we were princes of the city.

The movie missed a lot—naturally, they always do. But I thought the book was just fantastic. He put stuff in there that I had forgot I even said to him. Stuff I hoped he would never put in there, but he did. There was nothing that I didn’t think rang 100 percent true. I knew it was gonna rub a couple of people the wrong way because he portrayed people as they really were, but not as they saw themselves to be.

The police, I mean. I don’t care about the drug dealers. One comment I think I did make is that I think Richard sees some good in those people, and I see absolutely nothing.