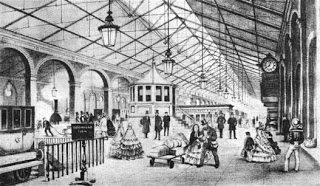 From Charles Baxter’s “The Feast of Love:”

“And then we were making love . . . and my soul—I can’t believe I’m saying this, but it’s what happened—became visible to be. My soul was a large and not particularly attractive waiting room, just like in a Victorian train station with people going in and out. In this waiting room were feelings I hadn’t known I had, discarded feelings, feelings with nowhere to go, no ticket to a destination. It turned out that I was larger than I had known myself to be; there were multitudes of feelings in there. This can happen any sort of way. I don’t care if you disapprove of what I’m telling you or the means I used to discover it. I warned you: I’m not an original. But at that point I felt like one. I’m just telling you how it happened with me. I was a different person than I had planned to be. My soul was not particularly attractive, but the surprise was that it was there, that I had one.”