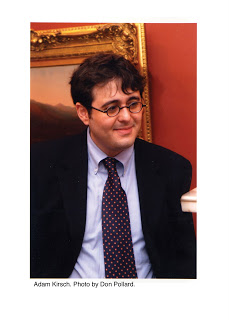 Each week, the National Book Critics Circle will post a list of five books a critic believes reviewers should have in their libraries. We recently heard from recent Balakian finalist Adam Kirsch. Here are the books he pointed out.

Selected Prose of Matthew Arnold: Arnold still tends to appear to us, when he appears at all, as the complacent Victorian sage T.S. Eliot made him out to be. In fact, Arnold is a critic for our time, because he wrote in and against a society much like our own: rich, busy, materialistic, and incurably self-satisfied. In his literary criticism, as in his social and cultural polemics, Arnold tried to convince his countrymen that their society would be judged by its intellectual values, not just its technological achievements. His insistence on “the best that has been thought and said” is still an inspiration, and his elegant, ironic style shows that seriousness doesn’t have to mean solemnity.

Required Writing by Philip Larkin: Larkin is not usually thought of as a poet-critic like T.S. Eliot or Randall Jarrell. But this collection of his essays and journalism is full of the same sly, funny intelligence that animates his poems. His central principle is that “poetry is an affair of sanity, of seeing things as they are,” and he defends it against all the wayward trends and mediocre institutions of what was already emerging, during his lifetime, as the professional poetry world. In “Subsidizing Poetry,” he warned that the proliferation of writing programs risked “killing the goose that laid the golden eggs by choking it with cream.” As a critic of individual writers, too, Larkin is superb, because he reads with the wholehearted involvement of a true poet. His admiration for Thomas Hardy and John Betjeman is not just literary but personal. Likewise, you can feel the sense of personal betrayal when he writes about the frivolities of late Auden: “one cannot escape the conclusion that Auden, never a pompous poet, has become an unserious one.”

Sincerity and Authenticity by Lionel Trilling: To get a sense of Trilling’s complete range as a critic, the best choice is his selected essays, “The Moral Obligation to Be Intelligent.” But this short book, based on a series of six lectures, shows the essence of his technique—using literary criticism to explore the history of ideas, of sensibilities, even of morals. Why is it, Trilling asks, that modern literature is the literature of what Hegel called “unhappy consciousness”? Why do modern writers believe it is more important to be authentic than to be good or happy? Tracing the history of this evolution, from Jane Austen down to Herbert Marcuse, Trilling manages to strip modernism of its classroom respectability and make its real shock and challenge come alive. He also shows how literary criticism, at its best, is not just about literature but about life.

Letters on Literature and Politics by Edmund Wilson: If Trilling is the critic as moralist, Wilson is the critic as journalist, and this cleverly edited collection of his letters offers a wonderfully alluring picture of the life of the working man of letters. As we follow Wilson’s career over half a century, we see the history of modern literature unfolding. He tells Scott Fitzgerald how to find a copy of Ulysses in 1921, debates Trotsky vs. Stalin with Malcolm Cowley in 1937, and quizzes his Russian friends about Pasternak in 1958. All along, the letters show Wilson contriving to get paid for following his passions, as he moves from Vanity Fair to the New Republic to the New Yorker. Wilson’s gift for making a home in literature helps to explain his extraordinary confidence and authority as a critic.

Adam Kirsch is a book critic for the New York Sun and the author most recently of “The Modern Element: Essays on Contemporary Poetry” (WW Norton).