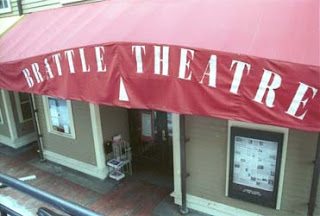 By 6 pm this past Wednesday evening, approximately 80 or so highly informed readers had braved a sleet-sodden evening to fill the main floor of The Brattle Theater.  They were there for a roundtable discussion sponsored by the Harvard Book Store in conjunction with the NBCC—a conversation fuelled by the release of the NBCC’s Winter “Good Reads” list.  The participants: moderator David Mehegan of the Boston Globe, and a former NBCC board member; novelist, memoirist, and literatus Leslie Epstein; Harvard professor of psychology, cognitive scientist, and author Steven Pinker; and me, Maureen McLane, representing the NBCC.  And of course, the audience.

After Heather Gain of the Harvard Book Store welcomed all to launch the evening (thanks Heather!), David Mehegan introduced everyone on the panel and offered some reflections on the art and complications of recommending books.  David was especially interested in the whole “Good Reads” concept, vs. best-seller lists: “Why has this never happened before?”  He mentioned the phenomenon of lesser-known writers—e.g. Dawn Powell—whose books he particularly prizes, and who tend not to show up on best-seller lists.  The theme of un- or underacknowledged classics thus emerged.  David also mused on the much-discussed decline of reading, as detailed in the recent NEA report, “To Read or Not To Read.”  (Here I will editorialize and say that if reading for pleasure is to be coerced, well then it seems pleasure is no longer part of the equation.  I’d refer people to Leah Price’s witty, incisive critique of the premises and conclusions of the NEA report: see her article in the New York Times Sunday Book Review: “You Are What You Read.”

David noted some of the surprises on our Good Reads list: none of us had read all the books on the list, and I suspect most of us had only read one or two of them. This was the first I’d heard of poet Toby Barlow’s book, for example, and I’ll be looking it up.

Our brief pre-public-conversation in the green room (backstage at the Brattle, where actual films on actual reels were spinning) involved a communal musing on the term “Good Reads.”  Leslie wondered if “good reads” generally connoted “beach reads” and remarked that none of our “Good Reads” seemed much of a beach read; he suggested on stage that no book of poetry could be a “good read” in that sense—too hard!  Requiring too much concentration!  (Yet as I meant to tell Leslie, there’s always Rod McKuen….and some other poets I will refrain from mentioning.)  Leslie shared further thoughts arising from a long reading and writing and teaching life, and he invoked a list he’d often shared with students, of those books essential to him: among them, “War and Peace,” “Remembrance of Things Past,”  and “Ulysses.”  “Anna Karenina” seemed to be an outlier.

Leslie also noted the perils of reviewing and opined that among the several responsibilities any reviewer has (to her readers, to the magazine or paper commissioning the review, to the book), another enormous responsibility is “to all the writers standing behind the book and writer being reviewed”—e.g. for a novel, the vast and deep tradition including Dickens and George Eliot.  Not so many people seem to be up to that responsibility, Leslie suggested.  Leslie rather melancholically observed that he himself had largely renounced reviewing—and he suggested that few people were sufficiently mindful of standards when reviewing…..but he was all guns blazing when recommending books….and when discussing the highest aspiration of art as that which, to paraphrase Tolstoy, grabs you by the scruff of your neck and makes you love life.

Steven Pinker was all set to sharpen our thoughts on the whetstone of his wonderful examples: about self-amplifying feedback loops, “common knowledge” (a term of art, it appears, among researchers), and the peculiar effects of nominating/voting for something you think others will vote for.  Steve noted that Best Seller lists are often arbitrary, and not just in a casual way: small differences magnify as others read what they are told others are reading.  Steve gave as an example of the bizarrerie of certain popularity contests the case of the Most Admired Women, who apparently turns out quite often in recent years to be Laura Bush: not because she is necessarily the most admired, but because people will pick someone they think others will also vote for, and that has usually been the President’s Wife.  Thus you don’t nominate your Aunt Ethel, who might be the woman you actually most admire, because you want your vote to count, and the general public does not know Aunt Ethel.  (Alas, Dennis Kucinich.) Steve suggested that “Good Reads” might have some of this kind of distortion (nominating books you think others will know) but less than that in more standard recommended lists, and certainly less than that in best-seller lists.

As an example of the likely cost of avoiding that kind of proleptic, endlessly recursive psyching-out (I guess what you guess that I guess what you will vote for, and do the same), Steve mentioned that his own choice for nonfiction—James R. Flynn’s “What Is Intelligence”—was one that most likely few outside his field had read, and thus the book would never show up on Good Reads. Personal recommendations rather than aggregated lists may then be better indicators of those books readers are really committed to.

Here I was able to interject that one fine feature of the NBCC Good Reads project is our publication of a complete longlist—all titles mentioned more than once by nominators appear on the blog, as I understand it, not just the top five vote-getters.  So as Steve said, and as John Freeman has described, “Good Reads” is strikingly different from, though it may have some overlap with, your default recommended or Best Seller list.

Other topics broached: is reading best understood as a private pleasure and/or a social one? Don’t recommendations suggest we have a social traffic in books?  Maybe what goes begging in a lot of discussions is the matter of taste, and multiple ways of reading books, and multiple desires for different kinds of books:  some days you want a salad, other days lobster.  There was a certain amount of perhaps deserved beating-up of “The DaVinci Code,” but that seems like a peculiar kind of shadow-boxing: Dan Brown just ain’t in the ring with Proust! Or with Junot Diaz!  At any rate, that’s another conversation….

We also talked about the intricacies and intimacies of personally recommending books: it’s like setting up a date, and you run the risk of getting blamed if it goes badly.  David had a great anecdote about a woman who recommended a book to a friend, who hated the first 20 or so pages; the woman insisted her friend continue til the end, which the friend grudgingly did: friend still hated it.  Why did you make me read this book? sd friend.  To see if you hated it as much as I did, sd the woman.

Then too there is the phenomenon of the good bad book, and the bad good book.  Another time.

The audience was very engaged and full of comments and questions—what specific books would we recommend?  (Steve: “What is Intelligence,” his choice for nonfiction; David hailed Tahmima Anam, “A Golden Age: a novel”; he also saluted Madeleine Albright’s “Memo to the President Elect”; Leslie saluted Edward P. Jones’ “The Known World” and Victor Klemperer’s diaries; I mentioned Elaine Scarry’s “The Body in Pain” as a nonfiction classic; and Michael O’Brien’s “Sleeping and Waking” and Tom Pickard’s “Ballad of Jamie Allan” in poetry; am also hugely impressed by Daniel Walker Howe’s new history of 19th C America, “What Hath God Wrought,” poet Laura Kasischke’s “Lilies Without,” Per Petterson’s novel “Out Stealing Horses,” which David also loved.) What did we think of digital and audio books: did they add or subtract to the experience? (Depends, we answered.  We were pro-audio, and noted that until this century most people had a much broader experience of hearing things read out as adults—without Netflix and HBO, people read to each other in the evenings.  When they weren’t doing other things.)

The clock ticked, the evening ended, people came up to the stage to follow up with more questions and conversation, and all then moved out to make way for the Brattle’s showing of “Let’s Get Lost.”  And so we did, and so to bed.