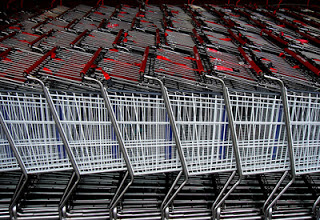 The following essay by recent National Book Award finalist Joshua Ferriskicks off the In Retrospect Series look at Don Delillo's “White Noise,” a finalist for our fiction prize in 1985 (it was beat out by Anne Tyler's “The Accidental Tourist.”) Read to the bottom and then follow the jump — it's worth it.

DISCUSSION OF WHITE NOISEtypically runs something like this: it’s a critique on contemporary culture that reveals the malignant pervasiveness of technology and television, the permeation of environmental dangers, the ugly juggernaut of consumerism and pop culture, the media’s cooptation of the individual, and the substitution of simulated reality for authentic experience. Plus its very funny, it invents a clever drug meant to assuage the fear of death, and all the characters sound alike.

With a serious qualification on the last, the above claims about the book are true. For technology and television, there is the unimpeachable authority of ATMs, data bases and computer printouts, and the spontaneous television babble coming from every room. For environmental dangers, there is carcinogenic sugarless gum, men in Mylex suits, and the Airborne Toxic Event. For the juggernaut of consumerism and pop culture, there are shopping binges, “failed possessions” and a faculty of New York émigrés teaching an “Aristotelianism of bubble gum wrappers and detergent jingles.” For simulated reality you have the most photographed barn in America and a band playing live Muzak. White Noise is a wildly inventive novel that, as has been said elsewhere, assesses the culture without succumbing to it.

But to end the discussion there misses one important dimension of the book. I read White Noise paying careful attention to the narrator’s fear of death and the defense against that fear which he constructs around him, a defense which looks upon close inspection something very much like a new kind of religion—one rooted in “white noise.”

In Don Delillo’s 1985 National Book Award winner, Jack Gladney is the department chair of Hitler Studies at the bucolic-sounding College-on-the-Hill, situated in the even more bucolic-sounding town of Blacksmith, which neighbors the similarly named towns of Farmington, Iron City and Coaltown. These place-names evoke a heightened, wholesome, middle-American setting, not too terribly divorced from real-life counterparts like Story City, Iowa or Wood Lake, Nebraska. The action of the novel unfolds over the course of one academic year.

One might expect in such a traditional setting, with its traditional year-in-the-life framing, to encounter the rites and rituals of traditional religion. Churches, bible study, signs for Jesus, pancake breakfasts, a Christmas, an Easter. But in Delillo’s Blacksmith, God is largely absent. In fact, for how perfectly the book captures the cultural zeitgeist that carries blithely on today, the absence of religion is conspicuous, and places the novel in a wholly secular, post-Christian world. In White Noise, not even the Catholic nuns believe in God. Consider this exchange late in the book between Jack and a nun named Sister Hermann Marie:

I said to the nun, “What does the Church say about heaven today?
Is it still the old heaven…?”
“Do you think we are stupid?” she said.
I was surprised by the force of her reply.
“Then what is heaven, according to the Church, if it isn’t the abode
of God and the angels and souls of those who are saved?”
“Saved? What is saved? This is a dumb head, who would come in
here to talk about angels. Show me an angel. Please. I want to see.”
“But you’re a nun. Nuns believe these things. When we see a nun,
it cheers us up, it’s cute and amusing, being reminded that someone still
believes in angels, in saints, all the traditional things.”
“You would have a head so dumb to believe this?”

“All the traditional things” are gone, and at this juncture of civilization, even bearers of traditional things like old Germanic nuns merely pretend to believe for the sake of nonbelievers. “Pretend?” says Jack. “Of course pretend,” replies Sister Herman Marie. “Do you think we are stupid? Get out from here.”

One universal and harrowing “traditional thing” still abides in Blacksmith, however: the fear of dying. Jack is the embodiment of this fear. He wakes in the night “in the grip of a death sweat,” visits the cemetery for no reason, and observes death even in the healthy. “The landlord was a large florid man of such robust and bursting health that he seemed to be having a heart attack even as we looked on,” he says in the spirit of the book’s bleak comedy. Jack is fifty-one years old, takes “blood pressure pills, stress pills, allergy pills,” sees floating spots in his peripheral vision, and complains of not feeling well. He confesses to his friend and colleague Murray Jay Siskind, “Ever since I was in my twenties, I’ve had the fear, the dread”—that is, the fear and dread of death.

When an industrial derailment occurs just outside Blacksmith, precipitating a catastrophe known as the Airborne Toxic Event, Jack is exposed to Nyodene D, “a whole new generation of toxic waste,” which puts an official seal on his dying. His fear, never abstract or far from his mind before the accident, is given an undeniable immediacy.

So what does Jack have to shelter him against these fears? What is his defense if he lives in a place and time when Catholic nuns have divested themselves of all religious loyalty, and when the customs, rituals and comforts of “all the traditional things” no longer abide?

Unlike Babette, Jack’s wife, who, unbeknownst to him, shares his acute fear, and who begins taking Dylar, an experimental drug designed to alleviate her terror, Jack’s fear response is more sophisticated and comprehensive than an easy pharmacological swallow. He finds answers or partial answers in the least likely places—in fact, in those places often pointed at in typical discussion of White Noise as being exemplars of the white noise that serve as the agents of loss of individuality, cultural homogeneity, and death. These include but are not limited to the television, the tabloids, and the omnipresence of consumer brand names. A robust understanding of Jack’s defenses (or of the defenses, really, that Delillo constructs for Jack) also includes a system of rites, rituals, incantations, litanies, pilgrimages, customs, vestments, asceticism, talismans, high priests and a house of worship, all of which are distinctly American—invented, Gatsby-like, to fit the needs of a secular society in thrall to pop culture and other non-religious modes of life. For proof of this, here is an exchange in which two of Jack’s colleagues conflate an ancient rite from a rich religious tradition with a popular, secular one of our own:

Lasher said to Murray, “We ought to have an official Day of the
Dead. Like the Mexicans.”
“We do. It’s called Super Bowl Week.”