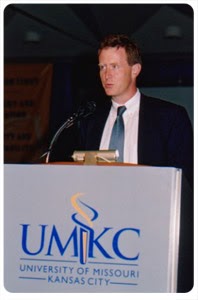 The month of June kicks off Reading the World. As part of this project, the NBCC has asked writers from around the globe to recommend a book from beyond these shores. We asked novelist Whitney Terrell author of “The Huntsman”and the “King of Kings County,” what he had to recommend. He said go find yourself a copy of “Good-Bye to all That,” by Robert Graves.

“A British writer may seem a bit close to home, but Robert Graves’ classic war memoir reads today like a dispatch from another planet. Graves saw more combat, more death, and more pointless destruction during WWI than any soldier in Iraq. He was left for dead at the Somme where, out of 110,000 Allied attackers, 60,000 were killed or wounded in a single day, thanks to the foolhardy plans of the British commander, Sir Douglas Haig. And yet Graves’ dry, matter-of-fact, and devastatingly funny description of the war’s absurdity — and his refreshing admission that he wrote it to make a “lump of money” — offers an interesting contrast to the more earnest soldier memoirs that have emerged from our current conflict. He published two versions of the book, one in 1929 and another, heavily revised, in 1957. It’s hard to find the original — my copy was mailed to me in New York via the University of Minnesota Library. Let’s hope for a reprint.