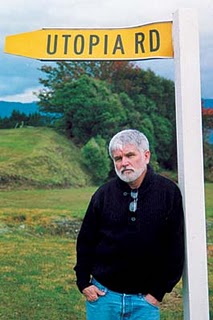 LIKE A FEW OTHERS ON THIS BOARD, I'm working my way through the Lee biography of Wharton, which is terrific (so far), and have set aside a weekend for Delillo, Ondaajte, Chabon, and Davis (not to mention Donna Leon). I also somehow missed Colum McCann's novel, which is a shame, since “Dancer” is just a tremendous novel. But in the interest of avoiding overlaps and keeping the gaze forwardish, here are the five books I'm looking forward to this spring:

1.) “Human Rights Watch World Report 2007” (Seven Stories) and “Inventing Human Rights,” by Lynn Hunt (W.W. Norton). The story of how human rights became an issue (and how we're doing with it) seems like one of the more essential ones to me these days, and a far more reliable gauge at the sucesses (and failures) of globalization (which Bill McKibben addresses in “Deep Economy”) than purely “economic” statistics.

2.) “Buda's Wagon: A Brief History of the Car Bomb,”by Mike Davis (Verso). Ever since “Late Victorian Holocausts,” Davis (pictured above, propping up his disapproval with this clever sign) has directed his magnificent intellect and energies at these brief micro-histories. This might be his most topical yet.

3.) “Kitchen Sink: New and Selected Poems,” by Albert Goldbarth (Graywolf). He's sort of a Jewish Bukowski, your crazy uncle, and a beautiful lyric poet all wrapped-up into one. This could be his second or third new and selected volume, but I really couldn't care less. I'll read it.

4.) “Kalooki Nights,” by Howard Jacobson. (Simon & Schuster) Probably the funniest person I know just finished this book and said, 'If you put Philip Roth's name on this book, it would be considered one of his most hilarious books.' Sold.

5.) “The Reluctant Fundamentalist,” by Mohsin Hamid. (Harcourt) I'm cheating a bit since I've already read and written about this book, but I think it's terrific — and its the first post 9/11 novel from a Muslim perspective. Hamid's also a stylish, smart writer, who channels Fitzgerald in the most subtle of ways.